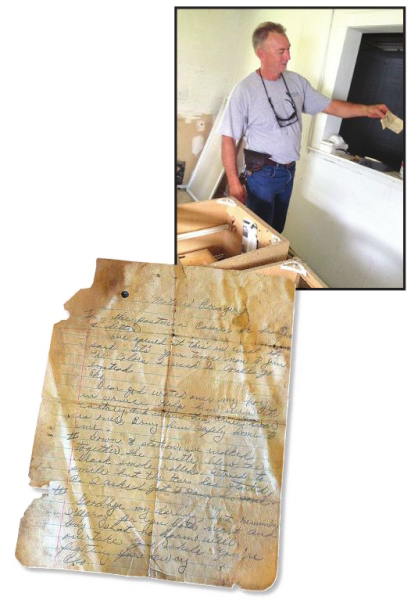 In the dusty attic of a home long vacated and left empty, Ralph Putnam found a hand-written letter penned by a mother whose son had just left for war. Titled “Mother’s Prayer,” the faded letter to God was tucked among the pages of an old newspaper dated 1937 and bundled with a long-closed restaurant’s menu. “The postman came, he brought a letter. We opened it, this is what it said. It’s your time now to join the colors. I wish I could go instead,” the letter reads. “Dear God, watch over my boy in service, until this cruel war is over and bring him safely home,” the letter continues. “Down the station we walked together, the whistle blew. The black smoke rolled. I tried to smile but the tears had started. Goodbye my darling, but remember, I’ll pray for you both night and day that no harm will overtake you while you’re fighting far away.” The one-story house at 2772 Leach Road “had just been sitting vacant,” Putnam said, before he purchased it recently, along with the nearby garage to use as storage space. Putnam’s plumbing business office is located directly across the street from the vacant house. He found the papers and letter while clearing the house out.

I figured she wrote the letter and put it in the attic, like she was writing down a prayer,” he said. “The letter details a mother’s anguish at seeing her son leave for war,” said Michelle Schwan, who works as general manager for Putman. “We wondered if she was still living, or if her son ever saw this letter.” Although originally a residential area, the neighborhood north of Auburn Road and east of Adams is now zoned industrial, with many businesses lining Leach Road and the nearby streets. Putnam said he was told the vacant house was formerly the home of the owner of Speedy Gas Stations, who worked from his house when the company first started out. Putnam said he’d like to know more about the story of the letter — if there are any family members around who remember the house and the son who left for war. “It’s a little mystery,” he said.